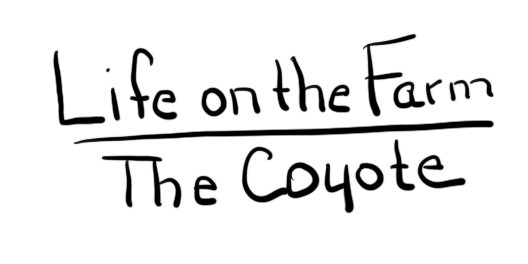 It occurs to me that you may be unaware of my official position at Old Town Farm.  You see me on the weekends as chief ball wrangler when, in fact, that is just one frame in a long film.  As head of protection services for the farm, I bring to the business a high degree of experience and skill, (some would say “bravery”, too)… Qualities that lesser dogs, (house dogs such as Pickle and Peach), are incapable of even imagining.  It’s not that these little dogs don’t have protective instincts. They do…as exemplified by their crazed yappiness when anyone comes to the door.  (I see by the red line under the word “yappiness” that it isn’t actually a word.  But it should be). Small dogs have their place, I suppose, but they do not instill fear in the bad guys the way a dog with great heft, great timing and great experience does.  Which brings us to…well…me.

I often tell the small dogs this story to instill in them the grave danger of going outdoors where the coyotes prowl.  If you’ve been following my blog, you know that Peach was actually kidnapped by a coyote once.  But what you don’t know is that, several years ago, I ended up in the dog hospital following an altercation with a coyote.  It all happened in what seemed like a moment and it’s still a bit of a blur, but I’ll tell you what I remember.

First of all, it is worth noting that there is a bit of a conflict between me and the bosses on this subject.  They will tell you that we are not trying to get rid of coyotes around here because they serve a valuable function, consuming pounds of mice each day.  I will tell you that a mouse will not eat a chicken and, therefore, I do not understand why having a coyote around is better than a mouse or two…or maybe more.  Me, I’m trying to get rid of the coyotes.

Anyway, it was a hot summer evening when I saw one of these shaggy guys in the produce garden pouncing on a mouse, (in that weird little rearing up way they do).  I took off like a rocket down the track and into the garden.  He took off too and this was all shaping up to be a typical chase scenario where I run the bad guy through the fence and off the property.  You see, the plan is never to actually catch the coyote.  I’m not a fighting dog.  I’m not even very fast.  But this event didn’t go as planned.  (This story gets very exciting now as you will see by all the exclamation points). I was mere feet behind the guy, racing westbound on the southside track when he actually tripped!  I AM NOT JOKING.  He tripped and fell and rolled head over heels about three times.  And, me?  I could not stop the momentum of my great bulk fast enough and I ran right over the top of him!  And here’s the really bizarre part.  In that split-second pile up, I ended up running in front of him in what I’m sure appeared to onlookers as though he was chasing me!

So, seeing as how he was inches behind me, in a flash of brilliance, I reassessed the situation and I made a sharp turn and headed for the house.  He, too, reassessed and veered the other way going south on the Duranes ditch bank.  The bosses saw the whole thing and I don’t even think they know how I ended up with the bites on my rear end.  I sure don’t.

I had to get stitched up and I was stuck in the house for days.  But we have lots of windows and I looked outside all day, every single day and I didn’t see that particular coyote come back.  I saw some other ones but not that one.

So, there you have it.  Just another exciting day in the life of Franco The Dog/Head of Protection Services